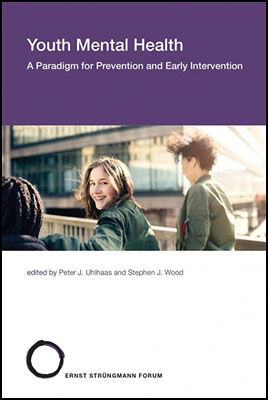 A Paradigm for Prevention and Early Intervention

With 'youth health' as a fresh paradigm for innovative mental health science, the book summarizes best evidence and wise counsel beyond a bio-psycho-social view of early intervention. Interleaving ethical, population, and systems factors, the authors present a compelling case for applied science as a social investment to transcend the constraints of current health care organizations. A must-read.

The authors of this impressive book are a veritable 'who's who' of researchers in the area of youth mental health. Beautifully written and comprehensive, this volume could serve as a core text for those who are studying in this area but is also suitable for nonscientists. A genuine game changer.

Psychiatrist, Royal College of Surgeons in Ireland; coauthor of The Mental Health of Young People in Ireland, The Epidemiology of Psychosis, and Journey Through the Brain

Over the past three decades, conventional views of mental illness have yielded few novel therapeutics and have done little to shorten the tragically long ten-year gap between onset of illness and treatment. This team of world-renowned scientists uses a hammer forged by recent advances in developmental neuroscience to shatter conventional paradigms and elucidate a path toward new and better interventions.

Mental illness represents one of the largest disease burdens worldwide, yet treatments have been largely ineffective in improving the quality of life for millions of affected individuals—in part because approaches taken have focused on late-stage disorders in adulthood. This volume shifts the focus by placing the developmental stage of “youth” at the center of mental health. The contributors challenge current nosology, explore mechanisms that underlie the emergence of mental disorders, and propose a framework to guide early intervention. Offering recommendations for the future, the book holds that early intervention in youth has the potential to transform outcomes for people with mental disorders and to reconfigure the landscape of mental health.

The contributors discuss epidemiology, classification, and diagnostic issues, including the benefits of clinical staging; the context for emerging mental disorders, including both biological and sociocultural processes; biological mechanisms underlying risk for psychopathology, including aspects of neural circuitry; and developing and implementing prevention and early intervention, including assessment and intervention modalities and knowledge translation in early treatment of schizophrenia.

Vulnerability and Opportunities for Early Intervention and Prevention

Goals of the Forum

Mental disorders continue to constitute one of the largest disease burdens worldwide. One reason for the continued bottleneck in improving mental health has been the long-held assumption that the most effective approach in targeting mental disorders is a focus on conditions once they are fully manifested as opposed to preventive efforts aimed at reducing incidence of major syndromes. The latter has gained significant support through a growing awareness and empirical evidence that the large majority of major mental health conditions emerge during the transition from adolescence to adulthood. This is furthermore supported by an increasing recognition that the brain is developing rapidly during this period, providing neurobiological windows of vulnerability and resilience for emerging psychopathology.

This Forum addresses these fundamental challenges by integrating data from different disciplines: basic neuroscience, psychology, cognitive neuroscience, psychiatry, and sociology. Its overall goal is to establish a coherent framework for a novel approach toward youth mental health that will target basic scientists, neuroscientists, clinicians, epidemiologists, and policy-makers.

Central Question: What are the most effective and natural methods for humans, robots, and AI agents to interact in support of instruction and learning?

Epidemiological evidence suggests that the transition from childhood to adulthood is the developmental period with the highest incidence of mental disorders across the life span. This group will develop a comprehensive framework to guide assessment, diagnosis, and early intervention for emerging major mental disorders in young people. Questions to be addressed:

The transition from childhood to adulthood is a developmental period that is highly influenced by social and cultural context, but our understanding of the way these contexts interact with individual differences (such as genetic variation) to generate or moderate psychopathology is limited. Combined with known transcultural variation in mental health, there is a critical need to better understand the general applicability of models of youth mental health which could be important for the development of appropriate interventions as well as the identification of risk and resilience factors. This group will delineate the contextual factors (e.g., gene-environment interactions, cultural, social and economic variations) that are important in the development of psychopathology during youth. Key questions:

For many years it was believed that the fundamental properties of the brain were sculpted mainly in utero and in the early postnatal years, but data from a range of disciplines have forced a reassessment of this notion. The transition from childhood to adulthood involves a profound reorganization of both architecture and functionality of large-scale networks, which is likely to constitute a vulnerability for emerging psychopathologies and opportunities for intervention. The mission of this group is to identify the central neurobiological processes that might give rise to mental disorders during youth: from basic circuit modification to higher cognitive functions. Questions to be addressed:

Group 4: Developing and implementing tools for prevention and early intervention

There is strong evidence supporting a link between youth and the emergence of the major mental disor­ders, which has supported development of specific treatment approaches and services for young people. Implementation of such services has presented a range of challenges across different cultures, communities, and health systems. This group will take stock of the international experience thus far and address the opportunities and challenges ahead for developing appropriate and acceptable youth mental health interventions. In particular, it will discuss the clinical, social, and economic opportunities and challenges for implementation, along with opportunities offered by novel online tools, psychosocial and biotherapies. Key questions: